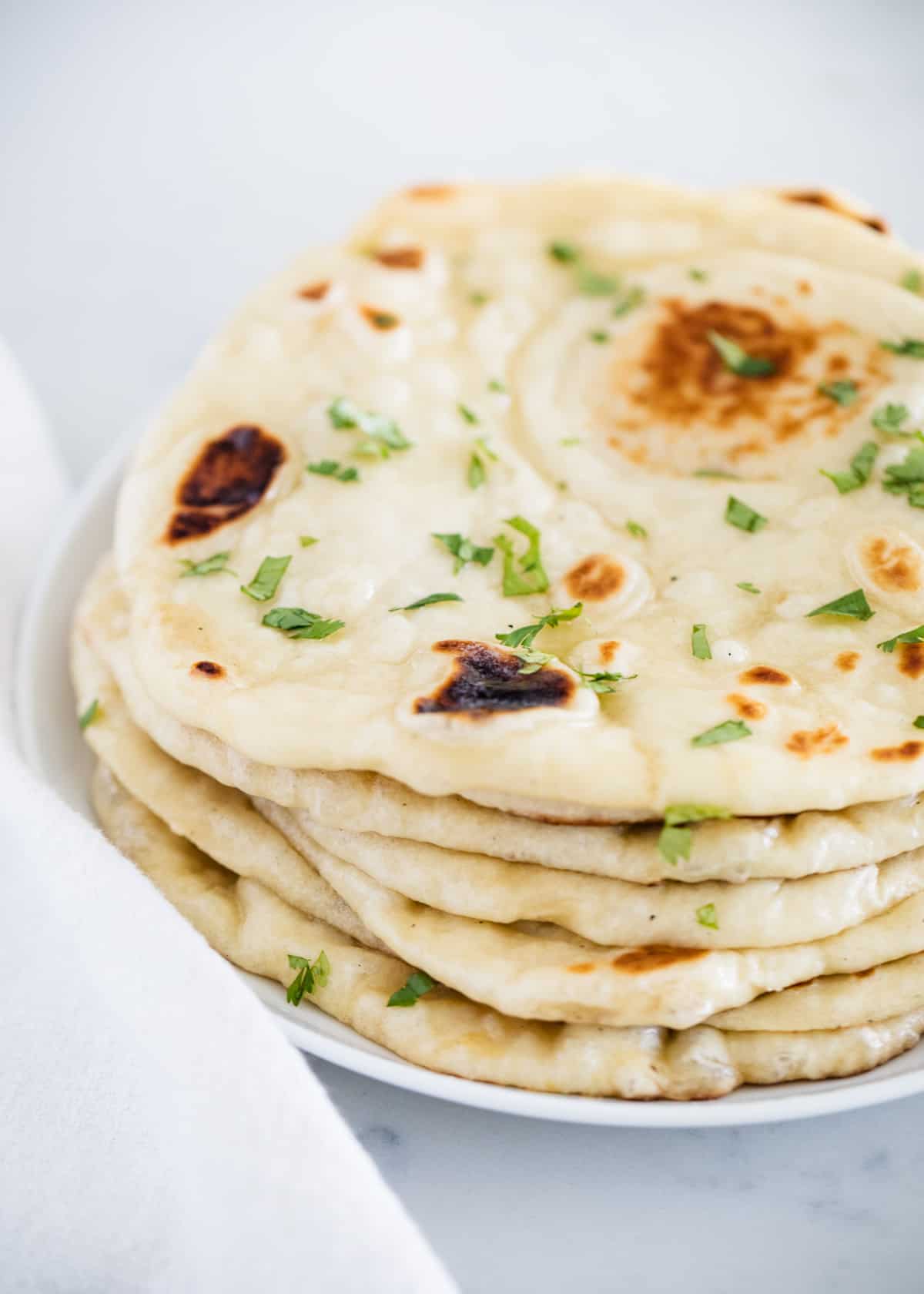 This simple homemade naan bread is super soft, chewy and delicious! You’ll never go back to store-bought naan after trying this astonishing recipe.

I love all types of Mediterranean food, but I especially love naan bread. It has the great texture and flavor and tastes delicious served with my favorite white bean hummus or skinny dill dip. So yummy! 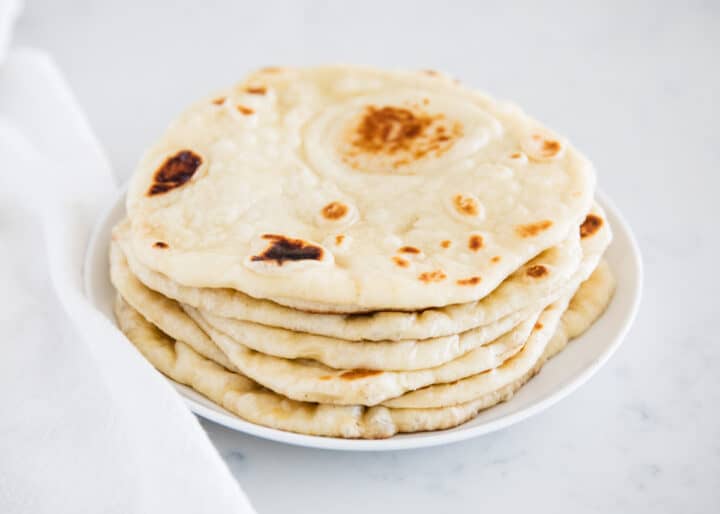 My family loves making homemade naan bread. The kids all obtain in on the fun. It’s a lot easier than you think it would be to make. There’s honestly nothing better than homemade naan bread, especially when it’s warm with melted butter. Seriously so good! Once you make it, you’ll never go back to buying store bought again.

What’s the difference between naan and pita bread?

While both are a flatbread, naan bread has yogurt mixed into the dough creating a softer and more chewy middle. It also gives the bread a small bit of tang. I adapted this recipe from my favorite pita bread. Pita bread is a lot more airy inside because it doesn’t have the weight of the yogurt. 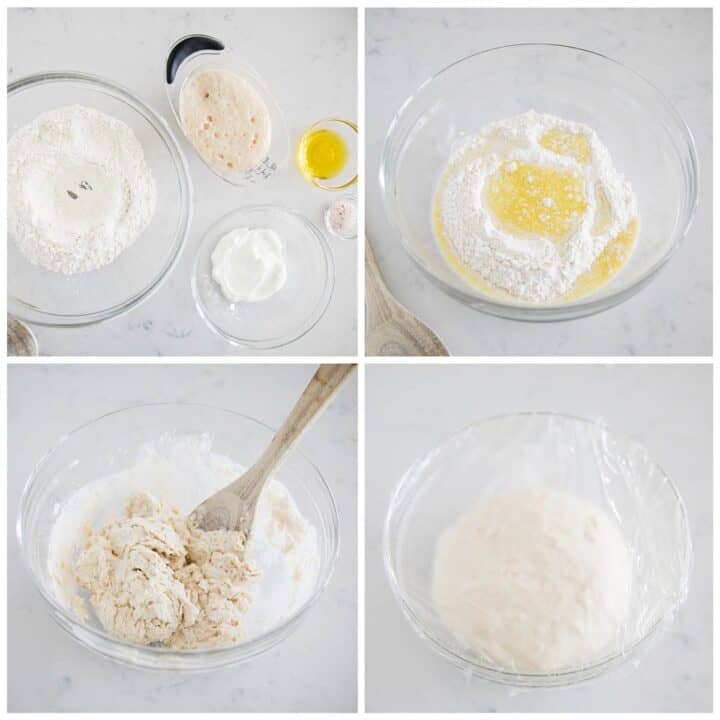 How to make naan bread

Proof the yeast. Start by mixing together the warm water, yeast and sugar in a medium bowl (I like to use a large measuring cup). Let it sit until the mixture begins to foam and puff up. Then stir in the yogurt, oil and salt.

Knead and let rise. Pour the flour in a large bowl and then create a well in the middle. Add the yeast mixture in the middle of the well and mix together until it becomes difficult to stir. Knead the dough with your hands (or an electric mixer with a dough hook) for about 3 to 5 minutes. Then shape into a ball and place in a greased bowl. Cover and let rise until the dough has doubled in size. 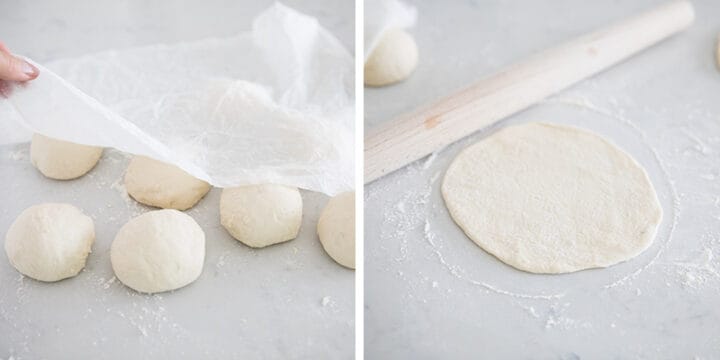 Shape and roll. Punch down on the dough, then divide into eight equally sized pieces. Shape each piece into a ball and cover with a damp towel for 10 to 15 minutes. Then roll each ball into a circle that’s about 1/8″ thick.

Cook in skillet. Brush the skillet with oil and turn the heat to medium. Once it’s hot, add in one of the naan dough circles. Cook for about 1-2 minutes, or until the top begins to bubble up. Then flip and cook on the other side until you see golden brown spots, about 1 more minute. Once done, place on a plate and cover with a towel to keep warm while you cook the others. 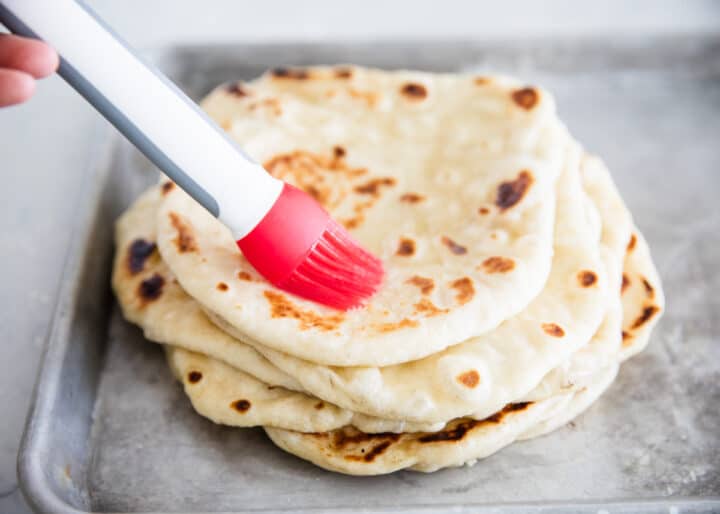 What to serve with naan bread:

If you have leftovers, this homemade naan will keep in an airtight container or bag at room temperature for about 1-2 days. You can also freeze any leftovers if you prefer. Layer the naan in a freezer bag with parchment paper in between each piece. Then store in the freezer for up to 3 months. Reheat in a damp towel when alert to enjoy. 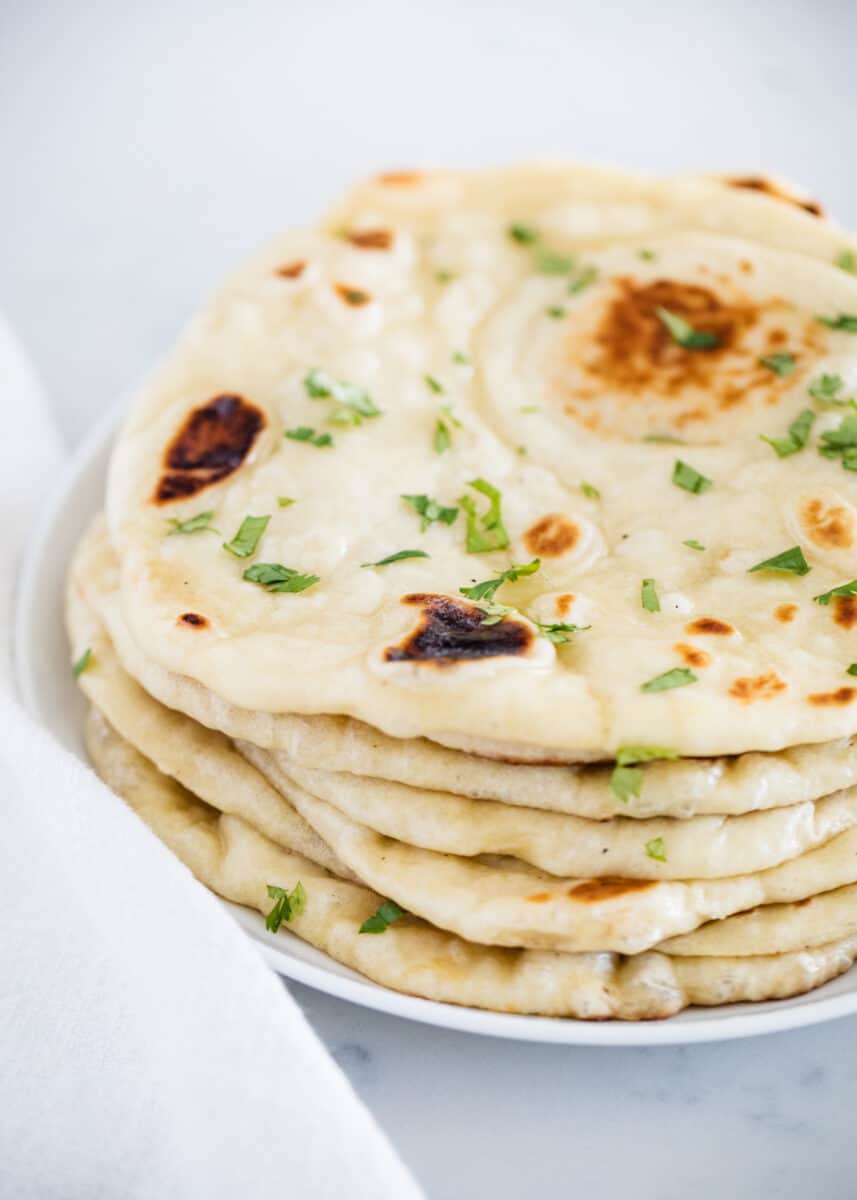 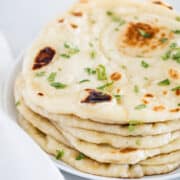 This simple homemade naan bread is super soft, chewy and delicious! You’ll never go back to store-bought naan after trying this astonishing recipe.

Freezer instructions: Place in a zip top freezer bag with a piece of parchment in between each piece. Store in the freezer for up to 3 months. Simply reheat in a damp towel.